The current Speedmaster Professional, the descendant of the ref. 145.022, produced with minor changes from 1968 until this day, is often called the “Moonwatch.”

That’s interesting because the 145.022 wasn’t the watch first worn on the Moon. This title goes to the Omega Speedmaster 105.012.

It features the asymmetric case with a crown and pusher guard, flowing seamlessly into the lugs – sort of a thicker right flank of the case.

The step dial, except for the Professional inscription, remained very similar to that of the 105.003. However, the design of the recessed subdials has changed slightly. The edges seem to be sharper, the bottom plane of the subdials also has a slightly different appearance.

Unlike the 105.003, not all 105.012s featured tritium markings. That begs the question if the lume used was tritium, because 1963 was about the time when Omega was phasing out radium lume.

It’s also worth remembering that the pushers are different, so replacements for asymmetric case Speedmasters would look rather
odd on a 105.003 if they’d fit at all!

The fine differences within the reference

Theoretically, it’s one reference, but within what’s supposed to be one model, you can spot some fine, yet visible things.

The finishing in cases from two different third-party case suppliers is different.

Two companies made Speedmaster cases – Centrale Boites (CB) in Biel, a long-time supplier to Omega, and Huguenin Freres, the renowned supplier to a variety of manufacturers (including Vacheron Constantin).

Interestingly enough, the CB cases have a somewhat finer finishing to them.

The “lyre lugs” have distinctive facet lines, running from the bezel to the inner corners of the lugs.

In CB cases, these lines are sharp, finely done. In HF cases, they’re smoother, almost giving the impression that someone refinished the case at some point in the past, which, of course, isn’t true.

But with Omega factory service being all too well known for polishing the cases out and replacing most of the components (bezel, hands, dial), it’s understandable that you avoid what could possibly be a result of buffing out the case.

Now, it doesn’t mean you should let your guard down just because a Speedy case is by HF.

As mentioned before, if the watch is a -63, don’t worry about the absence of T markings. That’s just the way it’s supposed to be.

The Speedmasters used on the Apollo 11 mission were – according to NASA documents – 105.012s.

A bit of a chaos in the documentation, maybe?

Or maybe because it was better for something in production and not something discontinued, to enjoy that fame.

If it works, it works, and if it sells, it sells.

Which – again – is a lot, because we’re talking about mass production, of a fairly common model.

However, if you’re a “hopeless case” of a space geek with a ton of NASA stickers and gadgets everywhere, you might want to consider the 105.012.

You’ll need deeeeep pockets though. Not just for the watch itself but also for maintenance. Parts for the 321 are expensive since they’re becoming rare and hard to come by.

Oh, and if you’re more into the Speedmaster’s racing heritage, it’ll be a good choice as well. Omega advertised both the 105.012 and the 105.003 with an emphasis on motorsport.

Michał Kolwas
A watch enthusiast from Poland. His favorite brands are Omega, Eterna, and Tissot. He loves sailing and drinking good whisky. Not at the same time.
Recommended Posts
Showing 4 comments 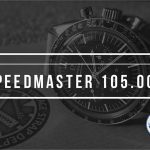 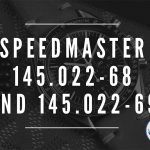