The Nezumi Baleine in the brushed edition, that I bought in August of 2017, is by far my favorite watch. Coming late to the party, soon after I bought it, that particular version was sold out and wouldn’t come back.

So, I’m super excited to test and review the new Nezumi Baleine with the reference BA2.101

Is the second version better than the first one?

The dimensions of the new Baleine are still roughly the same as the first edition, and that’s a good thing.

The diameter is 40 mm without the signed crown. The lug-to-lug is 47 mm.

It also still has the same bombé style lugs that wear so comfortably on the wrist.

While the lugs have the same style and shape, they’re not as thick as those of the first edition. The bezel is also slightly thinner, so in total, the second edition of the Baleine is about 1 mm thinner than the first version.

That’s great news if you wear many dress shirts. Especially if they don’t have a watch allowance.

The case back is a feast for the eyes. It has some texture with the Nezumi “N” logo and their motto (creating bonds) in the middle.

It has six inscriptions around the edge. One of them now says “220 M / 660 FT” instead of “Japanese Movement”.

Just like the case back, the crown is signed with the N-shaped logo.

The diameter of the crown is 7 mm, and it’s about 4 mm thick.

It’s large enough to provide a good grip without being too big.

The Explorer-style dial has a granite black color with white luminous markers and indexes.

The minute track, the Nezumi logo, the model name, and the WR have the same color as the discolored lume of the Baleine in the other color scheme.

The big difference with the previous version is that Nezumi decided to get rid of the date function. This makes for a much cleaner dial and is more in line with the vintage diver’s watches that the Baleine is based on.

I believe it’s the right move. In fact, it was one of the recommendations in the review of the first edition.

The text element between the 6 o’clock position and the center of the dial that says “BALEINE – 200m – 660ft” is lowered slightly. The new position is on the horizontal line between the 4 and 8 markers.

It has a 120-click unidirectional bezel with a black insert. That means that the bezel only rotates counter-clockwise.

The bezel has more and finer notches than the bezel of the first edition. It’s also no longer fully indexed. Instead, it has an elapsed time bezel in the style that Rolex designed in the late 1950s and which is still used on modern Submariners.

For the first 15 minutes, it has individual hash marks for each minute. The rest of the bezel is marked in increments of 5 minutes.

It feels well-made and doesn’t have any slack. Operation is nice and smooth.

The hands of the BA2.101 are polished gold with white lume, which is an excellent combo with the black dial.

The major difference between the two versions is the second hand. The older model has a luminous arrow and an N-shaped counterweight. This has been replaced by a stick hand with a lumed tip.

It’s a safer choice because the second hand was the feature that got them the most flak. I must be one of the few that liked the flair of the old version.

This particular version of the Baleine has white lume (C1 Super-Luminova) that glows green in the dark.

The strength of the lume on the dial is improved, but it’s not as strong as that of the hands and the bezel pip.

The lume is more than adequate, but don’t expect the C1 lume to have the same brightness as Lumibrite on a Seiko, for example.

The crystal is perfect for a modern vintage inspired diver.

It’s a double-domed sapphire crystal with an AR coating on the inside. It’s sturdy, scratch-resistant and the AR coating ensures that legibility is excellent.

On top of that, the domed shape gives the watch an appearance which is very similar to the vintage divers it’s inspired by.

The NH35 is made by Seiko Instruments Inc. It’s the same movement as the 4R35, but it doesn’t say Seiko on the rotor.

These movements are equipped with the Seiko Magic Lever, which shortens the winding period and lengthens the power reserve.

A few turns of the crown or a couple of shakes with the watch should be enough to make it run. The power reserve of the NH35 is 41 hours.

Seiko uses it in their Samurai and Mini Turtle lines, so you can be sure it’s a durable and reliable movement.

The new Nezumi Baleine [BA2.101] has a number of tweaks and most of them worked out well.

The thinner case is already worth buying this version in my opinion. The no date dial is another big improvement.

But are there no areas for improvement at all? Of course there are.

Despite these points of improvement, I believe the Nezumi Baleine is very high on the “bang for the buck” list. I can’t think of any other watch in this price range with the same specs. Most alternatives have a mineral crystal or a quartz movement.

If you’re looking for a vintage-style diver in the 40 mm range with an automatic movement, screw-down crown, and a sapphire crystal with AR coating – the Nezumi Baleine can’t be beaten for the price.

You can buy yours here.

What do you think of this new Nezumi Baleine? Let me know in the comments below.

P.S. If you’re a fan of Speed- and trash metal, check out the Baleine limited edition in collaboration with Anthrax, a metal band from New York City. You can read all about it at the Old News Club.

Melvin Hollenberg
The Dutch founder & editor of WahaWatches. His favorite hobby is to pull watches to bits. He's also a big fan of science fiction, baseball, and comics.
Recommended Posts 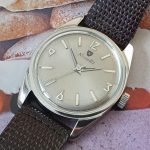 Service: Nivada With an AS 1802 MovementWatchmaking Doxa Watches of the LuftwaffeWatchmaking