Nezumi is a Swedish lifestyle brand that was founded in 2011 by David Campo Cardenes.

The name comes from the character named Nezumi Kozō who was a thief and a folk hero. Just like Robin Hood, he was said to steal from the rich to give it to the poor. The name is appropriate because Nezumi supports several charities.

The Baleine (French for whale) aims to channel the spirit of dive watches from the 60s and 70s in a modern, sporty dive watch.

The diameter of the case is 40mm without the crown with a lug to lug of 47mm. These dimensions are perfect for a casual dive watch, and they match the vintage design. Many companies are producing watches in the 40 to 42 mm range. These appear to be right in the ‘Goldilocks Zone’ for the majority of wrists.

The case is well machined from 316L stainless steel with beautiful, clean lines and edges. I have the brushed version, so all the surfaces have been brushed, which is very neatly done. All the brushing is done horizontally, apart from the areas in between the lugs. At first, I thought that it was sloppy, but it was my mistake because it matches the brushing of the lug endpieces.

Speaking of the lugs…wow. In my opinion, the lugs are the best part of the watch. They’re twisted lugs that were made famous by iconic watches such as the Omega Seamaster 300 and of course the Omega Speedmaster. The lugs give the Baleine a sleek and elegant appearance, and because of the shape, the watch hugs the wrist and wears very comfortably.

If the case had drilled lugs, it would’ve been even better.

The case back of the Nezumi Baleine is a real work of art. It has six notches and six inscriptions along the edge.

In the middle is an engraving in relief of Nezumi’s logo and their motto of “creating bonds.”

The screw-down crown has a diameter of 6mm and is signed with the Nezumi logo.

Winding the movement and setting the time feels smooth and sturdy.

The dial is an homage to a classic 12-3-6-9 Explorer-style dial with arrow-shaped markers in between. It also has a minute track and a 24-hour index. I can’t say that it’s revolutionary, but it’s beautifully done, and the colors of the lume and the lettering stand out nicely against the color of the dial.

The lettering on the dial has an off-white color except for the depth rating of 200m – 600ft which is orange.

It has a date function at the 4:30 position. It’s okay because it doesn’t eat away at the markers or the minute track and the color of the date wheel matches with the dial.

The bezel has an aluminum insert, and it has the traditional 60 clicks. It’s black with engraved markings that are painted in a steel color with a luminous pip at 12 o’clock.

When you rotate the bezel, it does have some play, but it isn’t bothersome. The markings on the bezel and the minute track on the dial align perfectly.

I’m not sure why the numbers are split by indices. I can’t think of any vintage diving watches that had the same design element. It looks a bit odd, but it certainly adds something unique.

I like the syringe hands, but it’s not something that I’d associate with dive watches. Syringe hands are mostly found on chronographs and pilot watches like the Sinn 104 St, and is mostly a thing of the 40s. A dive watch should have wider hands because it increases the legibility, especially in the dark. Something like plongeur or sword style hands would’ve made more sense since it’s inspired by 60s and 70s dive watches.

The counterweight on the second hand is a nice touch. It’s refreshing, and it gives the watch a bit of Breitling flair.

The glow is surprisingly good for a watch with artificially aged lume. The hands (including the second hand) and the “pip” glow very brightly. Unfortunately, the glow of the dial itself is weak in comparison.

It’s not that hard to tell the time without the help of the dial because the hands and the pip glow very brightly, but it would’ve been great if all the lume had the same brightness.

The watch has a double domed sapphire crystal which is the best of both worlds. A sapphire crystal is very scratch resistant and is therefore perfect for a modern tool watch, but the shape matches the overall vintage feel of the Baleine.

The legibility underwater is excellent because the crystal has an AR coating on the inside. The coating has a bluish hue at certain angles.

I enjoy wearing the Nezumi Baleine. It’s the perfect mix of a casual watch and a tool watch.

You could wear it as a dive watch, but because of the color scheme and the vintage vibe, it won’t look out of place as your everyday watch. Nope, the Seiko NH35 automatic isn’t anything special but it’s reliable, and the one I have is very accurate. You can’t ask anything more from a movement, right?

Sure, it has a few shortcomings. The lume of the dial should be improved. Also, this watch screams for strap changes and drilled lugs would’ve made it so much easier. Finally, it would’ve been great if a no-date option was also available. A date function is convenient, but it always influences the balance of the dial. Many of the watches that it’s inspired on also didn’t have a date function.

This particular Baleine in the brushed version isn’t available anymore. In fact, the entire Baleine line isn’t available at the moment. Good news though. I’ve been told that Nezumi is working on a new version of the Baleine.

In my opinion, they’re well worth the money if the new versions are anything like their predecessors, especially if you pick it up with an early bird discount.

As for alternatives, there aren’t any that I could think of.

Yup, there are a lot of similar watches but no direct alternatives in this price range. Perhaps the Steinhart Vintage Ocean Military but it has a diameter of 42mm with a lug to lug of 50mm, so it’s not for everybody.

What do you think of this Nezumi Baleine? Is it something you’d like to add to your collection? Let me know in the comments below. 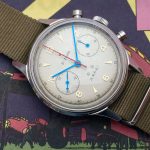