I came across this cheap watch at a collector’s fair. It’s an unbranded Flieger-style watch. Though it’s clearly not Haute Horlogerie, I liked the design and the appearance.

The watch was obviously mechanical because I heard the keyless works rattle turning the crown anti-clockwise. It didn’t run though and after a quick inspection, I saw that the minute hand was stuck on the subsecond. The seller let me have it for a song so I’d just bought another timepiece.

I suspected it was a Chinese movement so I thought it would be interesting to show you what you get when you buy a watch like this from eBay or a similar website.

Of course, glue is very crude and it screams botch job.

The movement is a Chinese Standard Movement or ‘Tongji‘. It was created in the 1970s by several Chinese watch factories joining forces. They studied many (Swiss) movements and combined all the best features in a prototype. The factories were ordered to stop producing their own movements and only produce the Tongji.

It closely resembles the Enicar AR1010. This isn’t strange at all because Enicar was very big in Asia.

As always, you have to begin by removing any power from the mainspring. Let the crown slip between your thumb and index finger and move the click away from the ratchet wheel.

Remove the balance and the pallets. Then, lift the ratchet wheel and the crown wheel and take out the barrel bridge.

Take out the cannon pinion on the other side (bottom plate) of the movement.

Remove the wheel-train bridge to expose the wheel train.

I found a blob of grease or dirt in the 4th wheel bearing jewel on inspection. That’s strange for a new watch, if you ask me.

The sub-second is mounted on a pinion with a long pivot instead of the 4th wheel. The 3rd wheel drives this pinion. 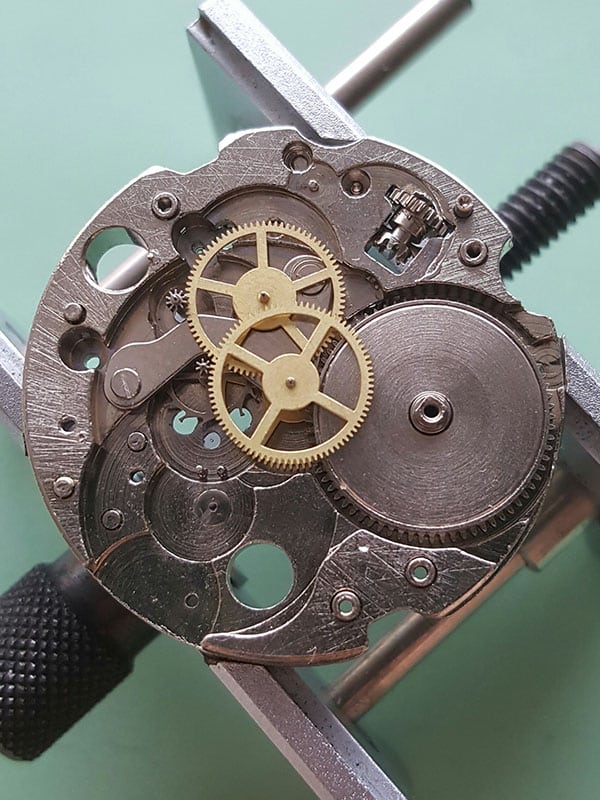 Lift the 4th wheel, 3rd wheel, the sub-second pinion, and the escape wheel.

Remove the main barrel and continue with lifting the center-wheel cock and the center wheel.

Turn it around and remove the motion works.

Then, remove the set lever spring and the rest of the keyless works.

Clean the parts in the watch cleaning machine.

Start with the center wheel and the center-wheel cock.

Then, fit the rest of the wheel train and the main barrel. Replace the wheel-train bridge.

You might have to wiggle the sub-second pinion a little because it’s more wobbly than a wheel.

Oddly, the bearing jewels in the entire movement are completely flat. No recess to hold oil.

Perhaps that is to save costs and produce these movements cheaper. Or maybe that’s because these movements are so cheap that it makes more sense to buy a new movement instead of having it serviced.

Replace the barrel bridge, the ratchet wheel, and the crown wheel.

Turn the movement around to reinstall the keyless works and then continue with the motion works.

Flip back to the top side and reinstall the pallets and the balance.

Be careful when you’re servicing a Chinese Standard Movement like this one. The shock protection springs are very loose.

It’s supposed to be a hinged anti-shock spring but the first one I opened pinged on the bench after I unhooked the second foot.

Flip the movement to the bottom plate to install the hour wheel and the washer.

I used 2 dial stickers to secure the dial when I was certain that the holes for the hands were alligning correctly.

It can’t hurt to buy a watch like this if you can buy it cheap. Don’t expect it to blow you away with quality and durability, though.

This is a perfect watch for the beach or a bachelor party.

Do you own a similar watch? Would you buy a watch like this? Let me know in the comments below.