This is a tonneau- shaped 1980s Girard-Perregaux dress watch. The movement is a Peseux 7040. Though this particular watch doesn’t have seconds it’s also available with sub seconds.

This caliber is often used in smaller flat dress watches because it’s a graceful and sleek movement. It’s beautifully finished in comparison to similar movements in other watches. Look at the Geneva stripes and the gold-coloured engravings on the wheel-train bridge.

The watch had a low amplitude and a short power reserve. It also suddenly stopped several times.

Remove the power from the mainspring by moving the click away from the ratchet wheel.

Let the crown slip between your thumb and index-finger.

Flip the movement to the other side and pull out the cannon pinion.

The barrel bridge is secured with 2 screws. The upper left screw is actually the set lever screw.

Normally, the set lever screw is smaller than the case screws but here they are approximately the same size.

Lift the wheel-train bridge to gain access to the wheel train. 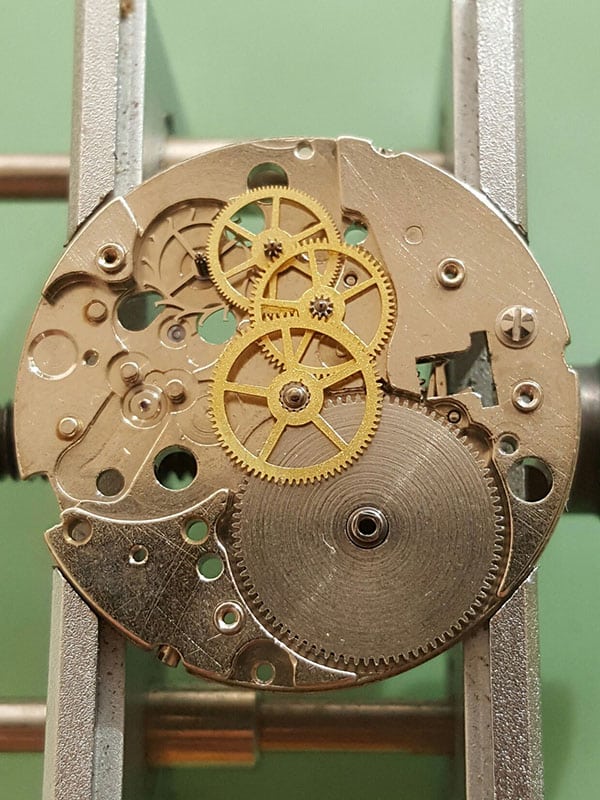 Remove the barrel and flip the movement around.

Start with removing the set lever spring and then the rest of the keyless works.

Continue with the motion works (intermediate wheel and minute wheel)

Start with the main barrel and the wheel train.

Replace the wheel-train bridge and continue with the barrel bridge.

Fit the crown wheel (don’t forget its shim) and the ratchet wheel.

Flip the movement to the bottom plate and start with the keyless works.

Also, replace the motion works (leave the hour wheel and the washer for now)

Turn around to the top plate again to reassemble the pallets.

After that, reinstall the balance and (hopefully) watch the Peseux 7040 come back to life.

Remember to fit the hour wheel and the washer before you reinstall the dial and hands.

Do you have a similar Girard-Perregaux or another dress watch with a Peseux 7040? Let me know in the comments below.