This Hamilton watch did run, but it didn’t keep time, the amplitude was very low, and it had a power reserve of only a few hours. If you wound it, you could feel and hear the mainspring slipping, so that pointed to a broken mainspring.

It has the Hamilton 60 movement which is an ETA 2390 with a KIF shock-protection system, and the stud carrier and regulator are slightly different.

The watch is in excellent condition, but the plating of the crown has worn down over the years because of use. Obviously, the crystal needed to be replaced as well.

Before you start working on a mechanical movement, make sure to remove all the power from the mainspring. This is to prevent any damage while working on the wheel train. In this case, it only had a small amount of power because of the problems with the mainspring.

Flip the movement around and start with the motion work. It’s usually best to disassemble these parts first, at least as far as the cannon pinion. If you don’t, you won’t be able to lift the center wheel.

Turn the movement around and lift the balance and the pallet fork.

Remove the ratchet wheel and the crown wheel (reverse-fretted screw) and lift the barrel bridge.

Lift the wheel-train bridge and remove the escape wheel, the sweep second wheel, and the 3rd wheel. Lift the barrel and the intermediate wheel.

Pre-clean the pivot holes and bearing jewels with a peg wood.
Clean all the parts in the watch cleaning machine.

Start with the set lever because this fiddly job is easiest with an empty plate.

Replace the intermediate wheel and the barrel. Place the escape wheel, the third wheel, and the sweep second wheel in position.

Reinstall the wheel-train bridge and the barrel bridge.

Install the crown wheel with its ring. Place the click and the click spring in position and install the ratchet wheel.

Turn the movement around and start with the motion works. Don’t forget to lubricate the bearing jewel for the escape wheel before you place the cannon pinion with the driving wheel into position.

Reinstall the winding pinion, the clutch wheel, the winding stem, the yoke with its spring, and the setting lever spring.

Flip the movement to the top plate and reinstall the pallet fork and the balance.

Place the hour wheel (with the washer). Attach the dial and case the movement.

Fit the hands and use a hand pump to clean the inside of the crystal and the dial.

I fitted a new crystal because the old one was too badly damaged to polish it.

What do you think of this Hamilton watch? Do you have a similar one in your collection? Let me know in the comments below. 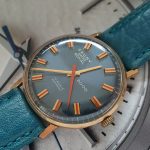 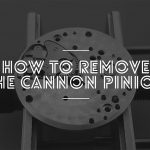 How to Safely Remove the Cannon PinionWatchmaking