Cortebert is probably best known for its railroad watches. They supplied both the Turkish as the Italian railways, though they used the Perseo brand name for the Italian railroads.

It’s powered by the Cortebert 739, which is a rebranded Unitas 6325 movement, a so-called “Wehrmachtswerk.”

The movement with the stem release button, mobile stud holder, and KIF shock protection date this watch to the late 1960s.

This Cortebert dress watch did run but the amplitude was very low, and the watch gained a lot of time. The hands also seemed to be misaligned, and you couldn’t feel any resistance while setting the hands.

As always, remove all power from the mainspring to prevent damaging the escapement or wheel train.

Move the click away from the ratchet wheel with a sharp peg wood while slowly letting the crown slip between your thumb and index finger.

Remove the balance and the pallet fork and store them somewhere safe. Some like to use a balance tack. Others store the balance upside down in a tray with a cover.

Without the balance and pallet fork, this is an excellent time to test the wheel train. Temporarily, fit the winding stem and crown and give it a few turns. The wheel train did spin freely but a bit sluggish due to hardened lubrication. This is one of the reasons for the low amplitude.

Usually, this would be the time to remove the cannon pinion because it’s safer to remove with the wheel-train bridge installed. If you don’t remove it, you won’t be able to lift the center wheel later.

In this case, the cannon pinion was very loose, and it came off with the hour wheel. It’s possible to tighten the cannon pinion, but I just ordered a new one. Be careful to order the correct one because they’re available in four heights!

Remove the ratchet wheel and the crown wheel (reverse-fretted screw), and lift the barrel bridge.

Lift the wheel-train bridge and remove the escape wheel, the fourth wheel, the third wheel, and the center wheel. Always check the pivots of the different wheels.

Lift the main barrel. I always order a new mainspring when the amplitude is low, so I removed the old mainspring from the barrel and placed the barrel, the lid, and the arbor in the cleaning basket.

Pre-clean the pivot holes and bearing jewels with a peg wood and Rodico.

The watch cleaning machine always has a very noticeable effect on brass and copper-colored movement. It seems that these metals develop a slight patina over time and the cleaning fluids very effectively remove that.

Place the main barrel in position (of course, you need to fit the new mainspring first).

Place the wheel-train bridge in position and lubricate the bearing jewels. Center wheel with HP 1300 and the other jewels with 9010.

Turn the movement around and fit the motion works and the keyless works.

The Unitas 6325 has a set lever with a button as a release instead of a screw, so place that into position first.

Lubricate the (new) cannon pinion, the return bar, and its spring, the winding stem, the setting wheel and intermediate wheel, and the clutch and winding pinion with 9501.

Flip the movement to the top plate and reinstall the pallet fork (lubricate the exit stone with 9415).

Place the balance into position and enjoy the watch coming alive.

Clean the KIF capstones on both sides with One Dip or similar (I’ve used lighter fluid with good results as well) and lubricate them with a tiny bit of 9010. Remove old hardened lubrication with a peg wood.

Place the hour wheel and washer in position, fit the dial and continue with casing the movement.

I fitted a new acrylic crystal because the old one was too badly damaged. I used a “Lentille” style crystal to keep the sleek design intact.

What do you think of this Cortebert dress watch with a link to the Turkish Railroads? Would you add one to your collection? Let me know in the comments below. 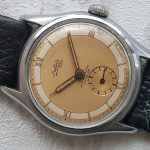 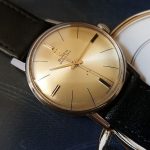