This is a nice Roamer dress watch with an MST 372 movement. This movement was produced with several types of shock protection systems. This one has Shock-Resist and that places the watch in the mid to late 1940s.

It has a US import code on the balance cock; FXU. That means that this watch was imported to the USA from Switzerland and was therefore intended for the US market.

FXU has Roamer and Meyer & Stüdeli listed so the movement is correct (at least the balance cock is).

The movement ran very erratically and setting the time was rough.

When I removed the hands, I found out why the Timegrapher showed me a snowstorm on the screen. The hour hand and the minute hand actually stuck together because of severe magnetism.

I used my Elma Antimag to demagnetize the hands and I demagnetized the trays with parts before I put them in the watch cleaning machine.

Before you start working on a mechanical movement, make sure to remove all the power from the mainspring. This is to prevent any damage while working on the wheel train.

Lift the balance and the pallets.

Turn the movement around and lift the cannon pinion. You won’t be able to remove the center wheel later if you forget this.

I noticed that the cannon pinion post was very dry. That and the fact that the setting wheel post wasn’t lubricated were the reasons why setting the time was so rough.

Lift the wheel-train bridge to expose the wheel train.

When I opened the main barrel, I noticed that it still had the original (blue) mainspring.

Those old mainsprings are made of carbon steel. They don’t have the S-shape and they’re most likely “set” to some degree. That means that the metal has lost the elastic limit and they’re stuck in the compressed form.

I removed the blue mainspring and ordered a new white alloy one.

Flip the movement around and begin with the bottom plate.

Install the barrel bridge, the crown wheel, and the ratchet wheel.

I took extra care to correctly lubricate the cannon pinion post and the winding wheel because setting time was very rough.

I use Moebius 9501 to lubricate the keyless works and motion works (not the minute wheel).

As you might have noticed, the regulator is almost completely to the ‘slow’ side.

That’s because someone has shortened the hairspring or it might have left the factory this way.

You can see that there’s a long end of hairspring at the other side of the stud holder. There is always a little end of hairspring but this piece is extremely long. That means that the effective length of the mainspring is shorter and a shorter hairspring equals a higher rate.

I had to move the regulator to the ‘slow’ side to counter this effect and increase the effective length of the hairspring.

It can’t really hurt but it would’ve been nice if the regulator was more in the middle of the balance cock.

Do you have a similar Roamer? Or a different style with the same movement? Let me know in the comments below. 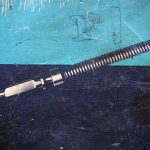 How to Replace a Winding Stem in 12 Easy StepsTutorials, Watchmaking 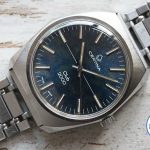