This is a regular service of a Caravelle watch.

Caravelle had links with Bulova (Bulova’s less expensive line). The movement is the Bulova 11DP which is a rebranded Citizen 0241 movement.

This movement was available in two versions. One has 7 jewels and the other one has 17 jewels.

When you remove the case back, it’s a bit disappointing to see that it’s the version with 7 jewels but it works. Actually, it works great because, after the service, the amplitude is 270 (which is very good for a citizen), with a beat error of 0.3 m/s and a rate of +4 sec.

Before you start working on a mechanical movement, make sure to remove all the power from the mainspring. This is to prevent any damage while working on the wheel train.

Lift the balance and the pallets.

Lift the wheel-train bridge to gain access to the wheel train.

Remove the ratchet wheel and the crown wheel.

Left-handed screws are usually marked with 3 grooves instead of just 1, just like these are. This is a visual warning: don’t try to unscrew it the usual way because you’ll break it.

Lift the barrel bridge and remove the sweep-second wheel, 3rd wheel, and the escape wheel.

Install the barrel bridge, the crown wheel, and the ratchet wheel.

Remember that both screws have a left-handed thread.

Notice that usually, the set lever spring covers the setting wheel and the minute wheel as well.

This particular movement uses a separate cover for the minute wheel and the setting wheel.

Remove the shock protection system to clean and lubricate.

The Bulova 11DP uses Citizen’s Parashock system. This system has a removable springy middle part with the bearing jewel and a top piece with a cap jewel.

You’ll need to rotate the top piece until one of the legs aligns with the notch so you can lift it. Replacing it is the same trick in the reverse order.

Use a peg wood to gently hold the top piece down while you’re rotating it.

Do you have a similar Caravelle watch or another watch with the 11DP movement? Let me know in the comments below. 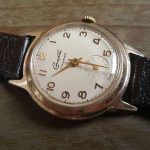 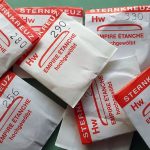 How to Replace a Watch Crystal in 5 Easy StepsTutorials, Watchmaking