I love Alpina watches. It’s one of my first mentions if someone asks me for undervalued watch brands.

This one has a stainless steel case, and it measures 34 mm without the original signed crown.

The movement is the in-house Alpina 592 with a sub-second and a nickel screw balance. This version has 15 jewels but there’s also a version with 17 jewels.

It has a serial number (800232), but as far as I know, there aren’t any charts that’ll tell you the year of production.

Before you start working on a mechanical movement, make sure to remove all the power from the mainspring. This method will prevent any damage while working on the wheel train.

When all power has been removed, you can safely lift the balance and the pallet fork.

Turn the movement around and lift the cannon pinion. You won’t be able to remove the center wheel later if you forget this.

Remove the ratchet wheel and the crown wheel, and lift the barrel bridge. Use a glass fiber brush to remove as much tarnish from the screws as possible.

Take out the barrel.

When I opened the barrel, it was obvious that it still had an older style mainspring. The inside of the barrel and the barrel arbor was also caked with solidified grease. I removed the mainspring and ordered a new one.

Lift the wheel-train bridge and remove the escape wheel, the 4th wheel, the 3rd wheel, and the center wheel.

Flip the movement around and start with the bottom plate.
Remove the motion works and the keyless works.

Pre-clean the pivot holes and bearing jewels with a peg wood.
Clean all the parts in the watch cleaning machine.

Start with the set lever screw because this is a fiddly job. It’s easiest without any other parts installed.

Place the barrel and the wheel train in position.

Install the barrel bridge, the crown wheel with its ring, and the ratchet wheel.

At first, it did run but the amplitude was very low and timekeeping was all over the place. It didn’t make sense because the pallet fork snapped to the next position with the slightest touch.

It turns out that the jewel hole wasn’t completely centered.

The cap jewel on the left fits on top of the jewel hole on the right and together they fit in the hole of the Incabloc block. The balance staff pivot goes through the little hole in the jewel hole. When the jewel hole isn’t perfectly centered, the pivot rubs against the side and that causes enough friction to mess up timekeeping.

I cleaned the jewel hole and the cap jewel and lubricated it with a tiny bit of Moebius 9010. It started to run beautifully after I installed it correctly.

Put the hour wheel and the dial washer in place and attach the dial. Proceed with the casing of the movement.

I fitted a new crystal because the old one was cracked and I used some KT22 grease on the tube. This adds a little bit of extra water resistance.

With its stainless steel case and silver dial, it looks much better on a new black leather strap.

What do you think of this Alpina dress watch? Do you have a similar one in your collection? Let me know in the comments below. 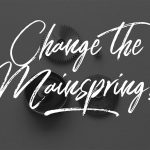 Do You Need to Change the Mainspring with Every Service?Watchmaking 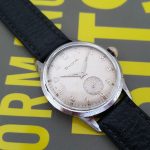